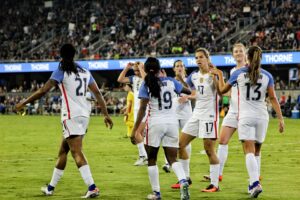 A six-year legal battle over equal pay has ended this month as the United States Soccer Federation (USSF) reached a settlement with current and former the United States Women’s National Team (USWNT) players in an equal pay lawsuit relating to gender discrimination. Alex Morgan, Megan Rapinoe, Hope Solo, and 25 other players had filed a gender-wage discrimination suit with the Equal Employment and Opportunity Commission (EEOC) in 2016, kicking off a case that reverberated throughout the sports world.

In March of 2019, 28 women athletes who were part of the US Women’s National Team filed suit against the USSF in the EEOC due to years of ongoing institutionalized gender discrimination against female players in their compensation and working conditions. According to the United States Department of Labor, women make an average of $0.82 for every $1.00 a man makes in the U.S. In the world of sports, men make 15%-100% more than their female counterparts (Adelphi University).

According to the terms of the $24 million settlement, $22 million will be awarded to the players largely as back pay, effectively serving as an unstated admission that pay between the men’s and women’s teams was unequal for years. In the future, the USSF will start paying men and women at an equal rate in all friendly matches, tournaments, and World Cups. The terms of the settlement will continue to be enforced as long as the team agrees to ratify its next contract.

Your employer cannot treat you differently because of your gender. The law prohibits employers, employment agencies, and labor unions from discriminating against an employee because of the employee’s sex. Your employer also cannot harass you or create an unreasonable environment at work based on your gender. If you believe your employer has discriminated against you on the basis of your gender or sex, because you don’t conform to gender stereotypes, because of your pregnancy status, or if you’ve been sexually harassed, subjected to a hostile work environment, or retaliated against because you reported such harassment or discrimination, contact the offices of Henrichsen Law Group, P.L.L.C. today.